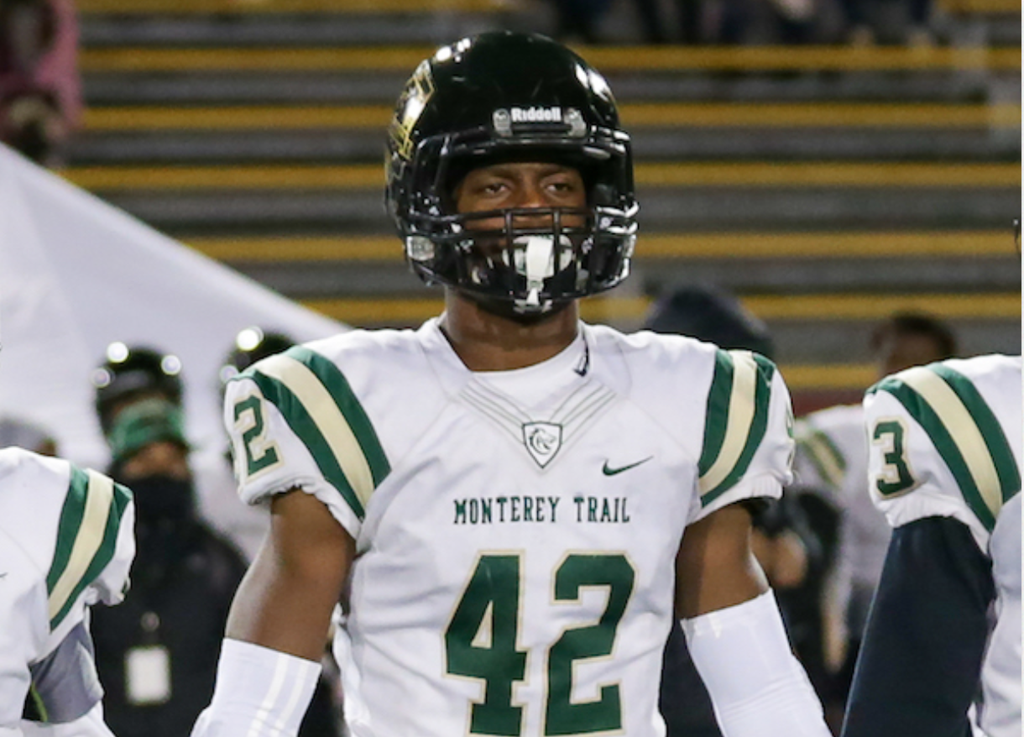 All that Marcus Jones, Jr. has ever wanted and needed is an opportunity. Give him that and he will take care of the rest.

Monterey Trail head football coach T.J. Ewing had doubts about inserting a 5-foot-10 sophomore into the starting middle linebacker spot. He’s certainly happy about that decision three years later. Jones put together an exceptional high school career capped by him being named the SportStars All-NorCal Defensive Player of the Year.

“I doubted him when I saw a ‘small’ player as an option at linebacker,” Ewing said. “But we will always open the door and give opportunities here at Monterey Trail.

“He took full advantage and started for us from the first down (of the 2017 season). He’s one of the best players that I have ever coached.”

Marcus Jones was the model of consistency over his three years as a Mustang. He recorded at least 120 tackles every year, including a 134-tackle campaign in 2019 that included 101 solo tackles and 5.5 sacks. The speedy linebacker always found his way to the ball and was a near-sure bet to bring down any opponent who had the ball.

“He was the most stable person in the program,” Ewing added. “He looks more like a free safety, but he understands the angle of pursuit and knows where the ball is going.”

Jones had the ability to avoid blocks and seemingly just appear in the right spot to make a sure tackle. In his three seasons, he grew some physically, but grew exponentially mentally to hone his game.

“I grew mentally and really learned the game,” Jones said of his development under Ewing, who also served as linebackers coach in Jones’ first two seasons. “When I started here, I only knew my position, but understood that I could be better and do more if I knew what everyone was supposed to do and where they were supposed to be on defense.”

That knowledge developed Jones into Monterey Trail’s defensive quarterback and leader, showing the Mustangs the way to a 24-3 record over the last two years. That run included back-to-back trips to the Sac-Joaquin Section Division I final. The Mustangs fell short in the championship to Sierra Foothill League powers Folsom and Oak Ridge-El Dorado Hills, respectively, but Jones and Monterey Trail certainly got the attention of the section’s top teams.

Jones’ next goal is to get the attention of college coaches and recruiters, who, like opposing offenses, have not seen the star defender coming for three years. Jones has not got the recruiting attention that his numbers demand. More than likely that’s due to him not fitting the prototypical dimensions of a Division-I linebacker.

Ewing understands the recruiting process. Especially its emphasis on measurables like height and weight. However, he also understands that Jones is not done contributing on the gridiron.

“He stands out on film and has performed on the biggest stages,” Ewing said. “There is no limit to his level. Some school will realize what he can do, and that he can continue to make an impact beyond high school.”

Jones takes that “snub” as a challenge. It’s another example of his quiet and humble leader persona.

“Size doesn’t matter because I can overcome that with my mind,” he said. “I am an athlete and can dissect plays and read the offense to make up for any lack of size.”

“Just take a chance on me.”

Ewing and the Mustangs are certainly glad that they did.