Last October, when things were normal and the high school football season was full swing, Monterey Trail’s Prophet Brown, like his name suggests, tweeted out his prediction for the coming months. “Turning this season up with my brothers,” he said.

Like a self-fulfilling prophecy, Brown helped lead the Mustangs to the Sac-Joaquin Section Division I football championship game, where he scored four times against the Oak Ridge-El Dorado Hills defense. His wild playoff run included a pick-six and 200 all-purpose yards against St. Mary’s, 122 yards and a score in a shocking upset over Folsom and 272 yards in a close loss to the Trojans in the title game at Sacramento City College.

“Prophet did everything he could to win that game (against Oak Ridge) for us,” Monterey Trail coach TJ Ewing said.

The Mustangs’ three-sport star averaged 12 yards a carry and scored double-digit touchdowns for the section finalist football program. He followed that by playing 25 games and helped the basketball program to an 18-11 record.

Brown helped the basketball team reach the section playoffs as well. He scored a season-high 11 points in his team’s lone playoff win against Bear Creek-Stockton. The Mustangs lost to the eventual section champions from Sheldon-Sacramento. 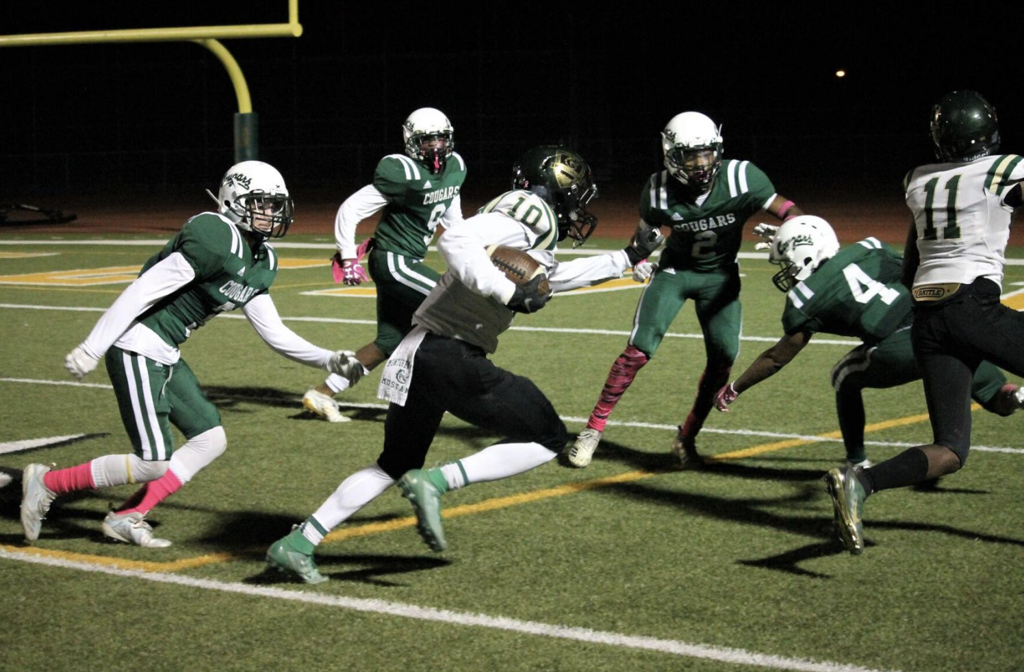 The COVID-19 pandemic ultimately cut his impressive junior year short. However, he still earned 2019-20 SportStars Magazine Athlete of the Year honors through his gridiron and hardwood efforts.

“That just shows you that hard work pays off — to just be recognized for an award like this,” Brown said. “It’s great but it’s also humbling. Your work is being noticed, which is nice, but you have to keep grinding.”

As a sophomore, Brown became a state champion track athlete as a member of Monterey Trail’s 400-meter relay team. His speed helped on the gridiron the following fall. He took over at running back in week six and tallied 1,531 all-purpose yards for the 12-2 team.

“One of our running backs went down (with an injury), so I had to step up and really focus on helping out there,” Brown explained.

Brown had a big game to knock off defending section champion Folsom on the road. He made one-handed catches and locked down the Bulldogs’ receivers for most of the night, including a pick on defense. The 35-23 victory for Monterey Trail ended Folsom’s nine-year streak of reaching a title game. It was the Bulldogs’ first playoff loss of any kind since 2016.

“He actually said it best himself in that playoff run,” Ewing stated. “After the Pleasant Grove or St. Mary’s game, his idea was he needed to play well so the underclassmen, who were sophomores at the time, would do the same for him when he became a senior. He said, ‘I am going to play as hard as I can because I want you to play that hard for me.’ When do you hear anyone having that perspective? For him to say that, I was blown away.” 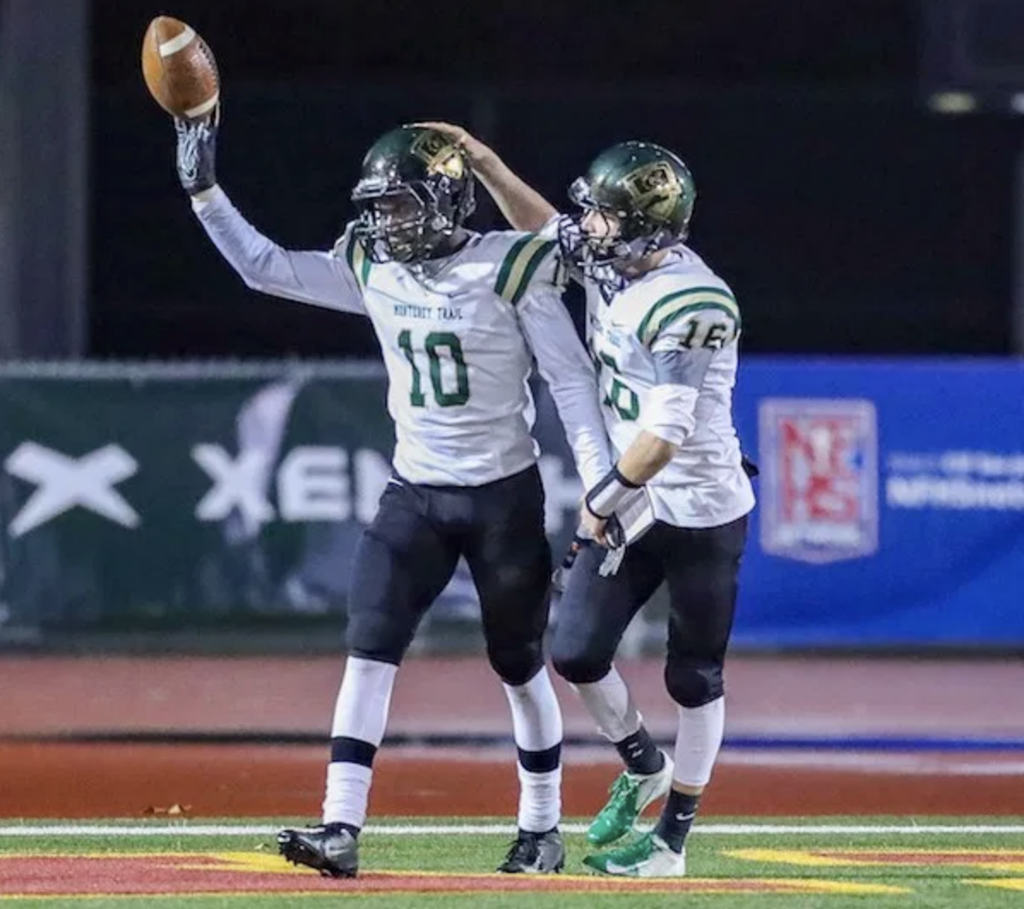 Brown enters his senior season as a four-star rated cornerback who recently committed to USC. He had offers from many programs and his top six included Michigan, Nebraska, Oregon, Oklahoma and Notre Dame.

“I told him, he could close his eyes and point his finger and he wouldn’t pick a bad one,” Ewing said.

Brown said it was a ‘dream-come-true’ to commit to USC, but noted that his recruitment changed when COVID-19 hit.

“The coronavirus and not having (school visits) really changed everything,” Ewing said. “He wanted to go out of state. He wanted to be challenged and wanted to try something different. I said he should take trips out to those programs and physically walk on the campus. Really get a feel for the atmosphere and see what they do for student-athletes — that can totally change your experience.”

Brown was comfortable on the West Coast and says his new school, “is close to home, but not too close.” 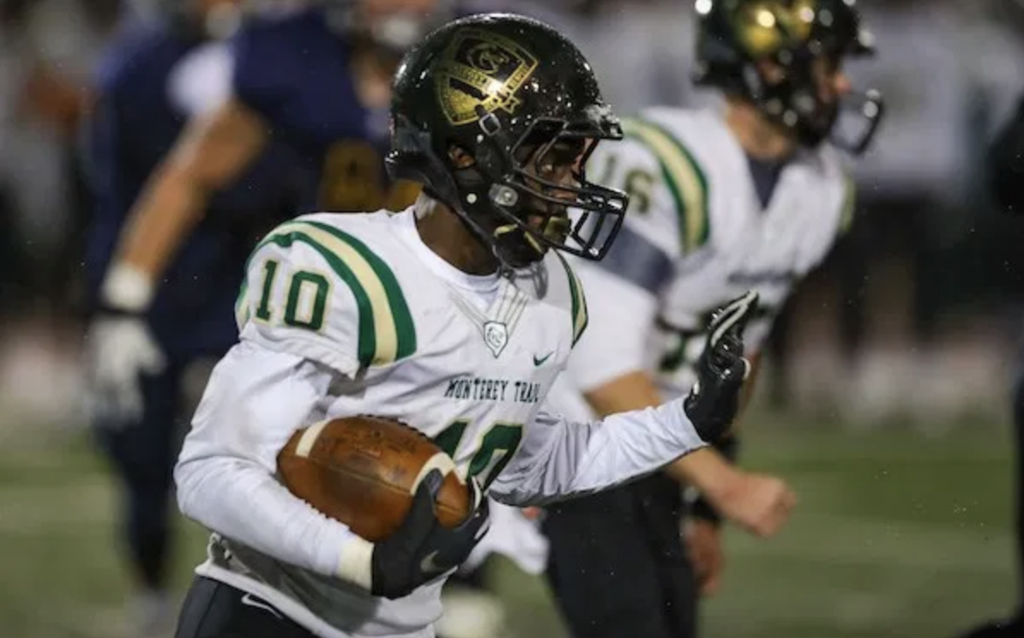 COVID-19 also changed the coming year. The new CIF two-sport calendar postpones Football until January and places traditional winter sports in the spring. That leaves Brown with a tough decision when football concludes in late March — play basketball or compete in track and field.

“I don’t know if I’ll be able to fit in both,” Brown said. “I’m going to talk to my parents and see what we feel is best moving forward.”

So one final question remains — does Prophet know what the future will be like?

“Honestly, I get messages from God, so yeah,” he said with a laugh.