‘We’ve got legs!’: No. 2 Monterey Trail races past No. 4 Cosumnes Oaks 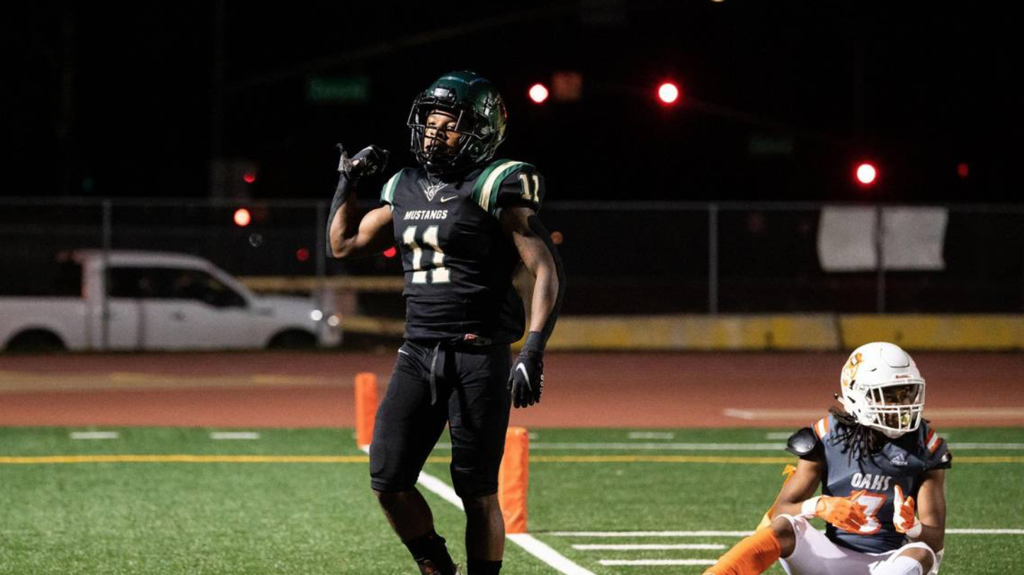 This just might be the fastest fleet in the Sac-Joaquin Section.

The Monterey Trail Mustangs have a downhill power running game with a speed element that grinds and gasses teams. The veer rushing attack under coach T.J. Ewing and his crop of stout offensive lineman and bevy of backs has been a trademark for years, and it was on display Friday night at Mark Macres Stadium in what figured to be a fast and fun track meet.

Behind its three-headed backfield attack and a defense that yielded little — and no touchdowns — in the second half, No. 2 Monterey Trail raced past No. 4 Cosumnes Oaks 57-21 in a spring football affair of Elk Grove Unified School District programs.

Otha Williams rushed for 192 yards and scored on runs of 55, 63, 3 and 10 yards, Chris Lands had scoring bursts of 25 and 52 yards and returned an interception 24 yards into the end zone, and quarterback Frank Arcuri expertly ran the show with deft handoffs, fakes or keeping it himself.

Arcuri had a 6-yard TD run, set up by his own 73-yard sprint inside the 10, and rushed for 102 yards. Lands went for 155 yards, and there were not enough game balls to go around for the offensive line surge of Andreas Argumedo, Xavier Powell, Jasdev Banwait, Melakai Red, Uvante Usher, Andre Royster and Fata Puloka.

Monterey Trail moved to 3-0 this shortened spring season, and Cosumnes Oaks looked as if it was still finding its legs in playing its first game after a frustrating stretch of canceled contests and stop-and-start practice sessions, the norm around the state in navigating through COVID-19 protocols.

Monterey Trail did all the damage against a talented Wolfpack team despite not having the fastest and perhaps top player in the section. USC-bound Prophet Brown elected to sit out this spring to focus on track and field, where he is a state-meet sprinter. But here, there are always runners, cornerbacks, playmakers and stoppers and a lot of guys willing to do the heavy lifting.

“We’ve got legs!” Williams said of his team’s ability to get downfield in a hurry. “We play hard. We love to run the ball.”

Monterey Trail led 29-21 after a wildly entertaining first half, and in the second, the Mustangs simply overwhelmed the Wolfpack by outnumbering them and controlling the clock and the game with run plays. Anthony Grigsby Jr. dazzled in the first half at quarterback for CO, scoring on a 1-yard plunge, then on a 67-yard TD sprint. Grigsby also threw a perfectly placed ball for a 76-yard scoring strike to DeShon Marshall, pulling his team to within 22-21.

It was all Monterey Trail in the third quarter as Williams scored three times and Lands on his interception return before a scoreless, running-clock fourth quarter. Arcuri took a knee to end it inside the Cosumnes Oaks 5-yard line.

“We made some adjustments in the second half, and we stuck with what always works for us: the run,” said Ewing, the Mustangs coach. “That was a fun game. Grigsby is an outstanding football player, so talented, and he was a handful.”

On the topic of talent, Ewing raved about Arcuri, son of offensive coordinator Rick Arcuri, for his poise and leadership. The coach is also a fan of his running backs.

“Otha’s a hammer, knocking nails down with how he runs, an old soul, a great kid, a terrific football player,” Ewing said. “Lands is our Swiss Army Knife, a guy who can play quarterback, receiver, linebacker, cornerback, safety, even left guard for fun. We’ve got some dudes.”

The biggest dudes are in the trenches. Said Arcuri, the junior quarterback, “Phenomenal offensive line, and even when (teams) they stack the box (to stop the run) and know the play, we still block it up.”

Said Banwait, one of the veteran linemen, “It’s the brotherhood that we have. We look each other in the eyes and have full confidence in one another and celebrate our success together.”

Ewing said before the game that this was, “our bowl game” because every game isn’t a sure thing until kickoff, given the testing and scheduling chaos. He told his team afterward, “I love you guys.” Players told their leader that they love him right back.

Cosumnes Oaks was down to 18 players and had four who will miss games due to CIF-transfer policy. Wolfpack coach Andrew Bettencourt, the Wolfpack coach, said his team had six linemen and six practices in a matter of weeks due to shutdowns.

“We fought hard,” he said, “but our kids were done — gassed. Monterey Trail looked like they were four months ahead of us.”

Monterey Trail plays Grant and Antelope in the final two weeks of the schedule. Cosumnes Oaks finish with Davis and Elk Grove.